Illinois licensed professionals of all stripes – from physicians and accountants to hairstylists and mortgage brokers – work with countless clients and patients throughout their long careers. As a Chicago professional license defense attorney, I’ve done the same. If you are one of those professionals, you are probably great at what you do, skilled and ethical, and with a long roster of folks singing your praises and leaving you glowing reviews.

But you can’t please everyone.

It is almost inevitable that one of the people you’ve served over the years will have some gripe about their experience with you, whether justified or not. That means the odds are pretty good that you will open your mail one day to find an unexpected and unwelcome letter from the Illinois Department of Financial and Professional Regulation (IDFPR) advising you that someone has lodged a professional license complaint against you and/or that you are under investigation.

Such a letter can make bills and junk mail look good. A notice from the IDFPR can get your heart racing and blood boiling. After all, everything you’ve worked so hard for is under attack. Adverse action by the IDFPR can result in the suspension or revocation of your license, threaten your Illinois professional license renewal, and destroy your career, your livelihood, and your reputation.

When you get an IDFPR notice, you have a critical choice to make. You can react emotionally and angrily; with righteous indignation at the complaining client/patient or the IDFPR. But acting out of emotions such as fear or anger can only make the situation worse and create problems that would not have existed had you only proceeded in a calm, thoughtful, and responsive way. So, keep these four tips in mind if and when you find out that the IDFPR is investigating a professional license complaint against you:

While your heart may start beating faster when you get a professional license complaint or notice of investigation, don’t panic. One, panic and irrationality rarely lead to good things and wise decisions. More importantly, panic is likely unwarranted. Many if not most IDFPR complaints and investigations are resolved either after an informal hearing or without the Department taking any action at all. Not that you shouldn’t take the matter seriously. You should absolutely retain an experienced Illinois professional license defense lawyer and respond in a complete and timely manner.

As unfounded as you believe the complaint or the IDFPR’s basis for investigating you may be, ignorance is not bliss. Failing to respond – or responding in a dismissive and contemptuous manner – just because you believe the matter to be bogus will create problems where perhaps none existed. Don’t angrily crumple up the letter or shove it in your desk drawer. Just failing to respond in a timely fashion to an initial IDFPR inquiry could subject you to discipline, even if there was no merit to the underlying complaint.

One of the worst things you can do is respond directly to or take any adverse action against the person who filed the complaint. In particular, do not under any circumstances take out your frustrations online or get involved in a social media spat with the complainant about their allegations and issues. For licensed physicians especially, breaches of online professionalism standards have been the subject of increasing scrutiny and disciplinary action by state medical boards.

The policies and procedures that govern IDFPR investigations, hearings, and imposition of sanctions are unique, complicated, and often unwritten and informal. The rules can also be terribly unfair. Even skilled and experienced attorneys who do not practice before IDFPR can find themselves at a loss when dealing with licensure issues. You are no doubt intelligent and know your profession well, but don’t make the mistake of thinking that you can or should handle an IDFPR investigation on your own. Your reputation, career, and livelihood are at stake. Defending yourself before the IDFPR is a gamble you can’t afford. Call an experienced Chicago professional license defense attorney as soon as possible after you’ve received that dreaded letter, and let them ease your fears and take the steps necessary to protect your license and your future.

As a former Chief Prosecuting Attorney and administrative law judge for IDFPR, I have seen the serious consequences that an adverse enforcement decision can have on professionals who suddenly find their future in disarray. I understand how and why the Department decides to pursue investigations, how it handles negotiations, and how to approach formal proceedings in a way that gives my clients the best possible chance of a positive and expeditious outcome when Illinois professional licensing issues arise. 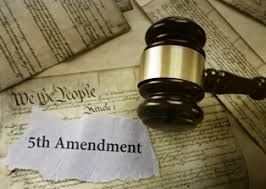 As you know from years of watching TV courtroom dramas or the travails of real-life politicians, people under criminal investigation or who are facing charges often “plead the Fifth” -that is, refuse to provide statements or testimony – because they fear that what they say can and will be used against them in those proceedings.

Similarly, many physicians or other professionals licensed by the Illinois Department of Professional Regulation (IDFPR) can find themselves under investigation or facing disciplinary action by the Department for acts which could also be the basis for criminal prosecution. For example, a doctor who improperly prescribes medication could face the loss or suspension of his or her license and also be charged with a crime for such conduct.

In such situations, can or should the respondent in an IDFPR proceeding exercise their rights under the Fifth Amendment when their answers could result in criminal liability?

The Fifth Amendment provides that “No person shall be… compelled in any criminal case to be a witness against himself…” This privilege has also been incorporated in the Illinois Constitution. (See Ill. Const. 1970, art. I, § 10.) The privilege essentially means that no person, without proper immunity, can be required to implicate himself in a crime.

Although by its literal terms applicable only in criminal proceedings, the Fifth Amendment privilege against self-incrimination has long been held to be properly asserted by parties in civil proceedings.

The logic behind applying the privilege in civil cases also applies to administrative actions such as IDFPR investigations and disciplinary proceedings, and can be asserted not only at a hearing, but during the investigation and discovery stage as well.  As the U.S. Supreme Court has stated:

“A witness’ privilege against self-incrimination `not only protects the individual against being involuntarily called as a witness against himself in a criminal prosecution but also privileges him not to answer official questions put to him in any other proceeding, civil or criminal, formal or informal, where the answers might incriminate him in future criminal proceedings.'”

As such, you can “plead the Fifth” before the IDFPR. The question of whether you should exercise your right against self-incrimination is a more complicated question.

Anybody faced with this choice faces a variation of the same dilemma. As the Supreme Court put it: a party must weigh “the advantage of the privilege against self-incrimination against the advantage of putting forward his version of the facts[.]” Accordingly, a “party who asserts the privilege against self-incrimination must bear the consequence of lack of evidence.”

What makes the choice even trickier is that, unlike in criminal proceedings, IDFPR hearing officers can draw an adverse inference from the professional’s refusal to testify and hold it against the professional so long as there is other sufficient evidence to support their findings.

The gravity and implications of exercising your Fifth Amendment rights in an IDFPR proceeding require careful thought and a consideration of all of the possible consequences. It is a decision that will be based on the specific circumstances of your disciplinary matter as well as the possible criminal repercussions of the acts under investigation. It is a decision that should only be made in consultation with your lawyer.

The moment you are contacted by IDFPR or learn that you are under investigation is the moment that you should contact me. I will immediately begin communicating with IDFPR prosecutors and work with you to develop the strategy best suited to achieving the goal of an efficient, cost-effective outcome that avoids any adverse action. Together, we will get you back to you clients and your career.